I'm speaking on "Prairie Defender: The Murder Trials of Abraham Lincoln" to the Filson HIstorical Society on September 12 in Louisville, Kentucky, on September 12. Here's the announcement from the Society: ANNOUNCEMENT.
Posted by George R. (Bob) Dekle, Sr. at 7:19 PM No comments:

I did a Bing search and a Google search on Prairie Defender: The Murder Trials of Abraham Lincoln and came up with eight sites which are offering free copies of the book.

I'm taking steps to have the websites shut down, but it is really a pain in the nether regions to have to deal with stuff like this. A number of other sites have already been shut down without my having to take any action.

This has happened on a small scale with other books that I've written, but never on such a large scale as with Prairie Defender. Does the fact that so many different websites have pirated your book mean that it is a good book?

Although the tentative release date for Prairie Defender was June 28, the book actually was published on my birthday, May 23, 2017. SIU Press put out a flier/brochure on the book, a copy of which is set forth below.

One thing which the flyer does not mention: In the endnotes to the chapters, you will find references to web pages which contain additional supplemental information about the people and events described in each chapter. 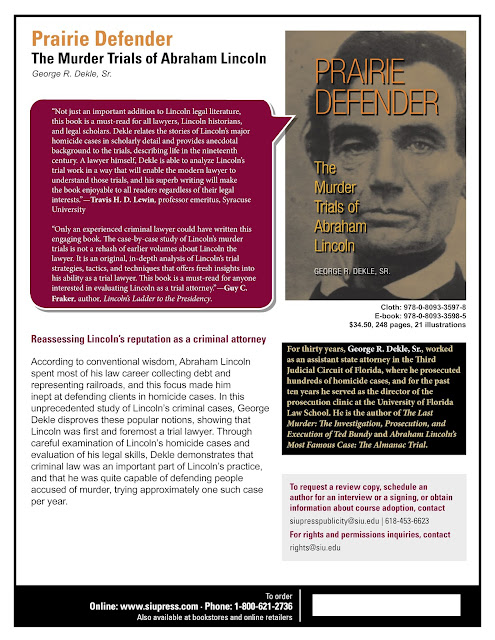 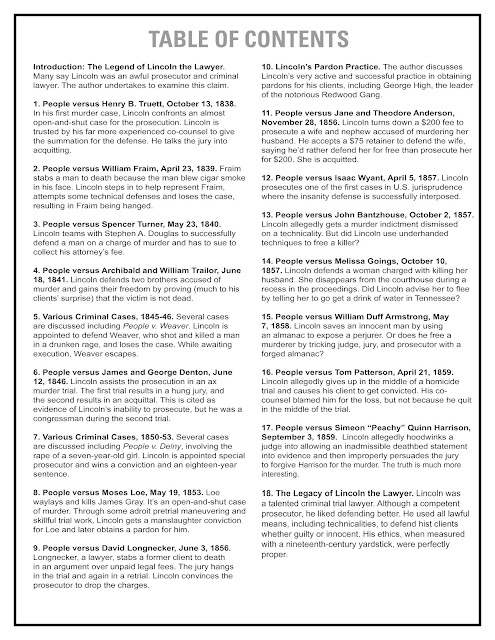 REVIEWS OF "PRAIRIE DEFENDER: THE MURDER TRIALS OF ABRAHAM LINCOLN"

As Prairie Defender nears its July publication date, and I busily correct the page proofs and prepare the index, I'd like to share some reviews of the book which we have received:


"With over 16,000 books published about Abraham Lincoln is there need for another? Emphatically yes! And this contribution to understanding Lincoln proves it. Lincoln’s service as president was based in large part on his experience as a lawyer as well as his first love – politics. The author describes succinctly that Lincoln was a first rate attorney, especially in his counsel in criminal cases. While not a large part of his practice of over 5,000 cases, Lincoln’s defense of those charged with murder demonstrate that he was skilled in the art of cross examination and clever by half in convincing juries. Much of this comes from his empathy by putting himself in the place of another and experience what they were feeling. This noble and effective quality in Lincoln’s character is shown repeatedly in this volume."—Frank J. Williams, retired Chief Justice of Rhode Island and founding Chair of the Lincoln Forum


"George Dekle’s 'Prairie Defender: The Murder Trials of Abraham Lincoln' is not only an important addition to Lincoln legal literature, it is a must read for all lawyers, Lincoln historians, and legal scholars. Dekle relates the stories of Lincoln’s major homicide cases in scholarly detail and gives anecdotal background to the trials giving a life beyond the trials themselves. As a lawyer, Dekle’s analysis of Lincoln’s trial work will not only enable the modern lawyer to understand those trials, but as a superb writer he writes in a manner to make the book enjoyable to all readers regardless of their legal interests."—Travis H.D. Lewin, professor emeritus, Syracuse University


"Only an experienced criminal lawyer could have written this engaging book. The case by case study of Lincoln's murder trials in not a rehash of earlier volumes about Lincoln the lawyer . It is an original, in depth analysis of Lincoln's trial strategies, tactics, and techniques; it offers fresh insights into his ability as a trial lawyer. It a must read for anyone interested in evaluating Lincoln as a trial attorney."—Guy Fraker, author, Lincoln's Ladder to the Presidency: The Eighth Judicial Circuit
Posted by George R. (Bob) Dekle, Sr. at 7:51 PM No comments: