Upstairs over our garage we have a bonus room. It is long and narrow with a low ceiling, and when I first saw it, I thought that it would make an excellent library. The next few months after we moved in, I spend a lot of time in the garage making and staining bookshelves. Lane was afraid that once I got the shelves loaded with books, the garage ceiling would cave in. I assured her that I would securely fasten each bookshelf to the wall, so that its weight would be borne by both floor and wall. Over the years after my first flurry of making bookshelves, I have from time to time built more shelves and installed them in the library until there is hardly a square foot of wall space which does not contain a bookshelf loaded with books.

The book situation makes it difficult to find wall space to hang pictures. A few years back, when I started working on Lincoln's Most Famous Case, I decided that I wanted a print of the most famous artwork depicting Lincoln's most famous case. You can probably tell from the title of this post that the picture is a painting by Norman Rockwell. In the painting Lincoln stands at counsel table tall and straight in his white suit. One of his hands is made into a fist, and it rests on a law book lying on counsel table. In his other hand he holds the almanac, open to the page which he will use to destroy the testimony of the state's star witness. He stares resolutely at the witness sitting offstage in the witness stand, and he appears to be preparing to spring his trap. In the background sits his forlorn client, manacled hands clasped in prayer and head bowed. Since the painting is copyrighted, I'm not going to reproduce it here. If you'd like to see (or buy) a copy of the painting, you can see it at the Norman Rockwell Museum Store  under the title Lincoln for the Defense.

When I got the picture, I realized that there was really not a good place to hang it in the office. I put it away, still encased in the mailing tube, and eventually forgot that I had it. I didn't forget the picture, though. I wanted to use it as an illustration for Lincoln's Most Famous Case, but the royalty far exceeded my budget. The book is an academic text, not expected to hit anyone's bestseller list, and while I don't expect to get rich from the book I don't want to go broke on it, either.

The other day I stumbled across my print of the picture and determined to get it framed. If I couldn't figure out a good place for it at home, I could hang it in the office. The framer called this afternoon, and I went to inspect it. I had initially planned to simply put a cheap frame around it with no matting, but my better judgment prevailed and I had it done nicely. I think the picture turned out well.

When I wrote Lincoln’s Most Famous Case, I used three campaign biographies as references--the works of Barrett, Bartlett, and Howells. I also had access to the brief autobiography Lincoln wrote for the use of his campaign biographers. I thought I had covered all the bases on campaign biographies, but I just recently discovered that I missed at least seventeen more. Amazon is taking pre-orders for a book by Thomas Horrocks titled Lincoln’s Campaign Biographies, and it says that over twenty such biographies were written.  This sent me scurrying to Google Books and the Internet Archive to try to find some of those seventeen or more campaign biographies. I succeeded in finding one—a pamphlet put out by the Chicago Tribune under the byline of John Locke Scripps. Only 32 pages long, the Tribune printed bushels of these pamphlets to be passed out by campaigners. After Lincoln’s death the pamphlet was reprinted in an annotated format at least twice, once by his daughter Grace Locke Scripps Dyche, and the second printed by Edward J. Jacob. 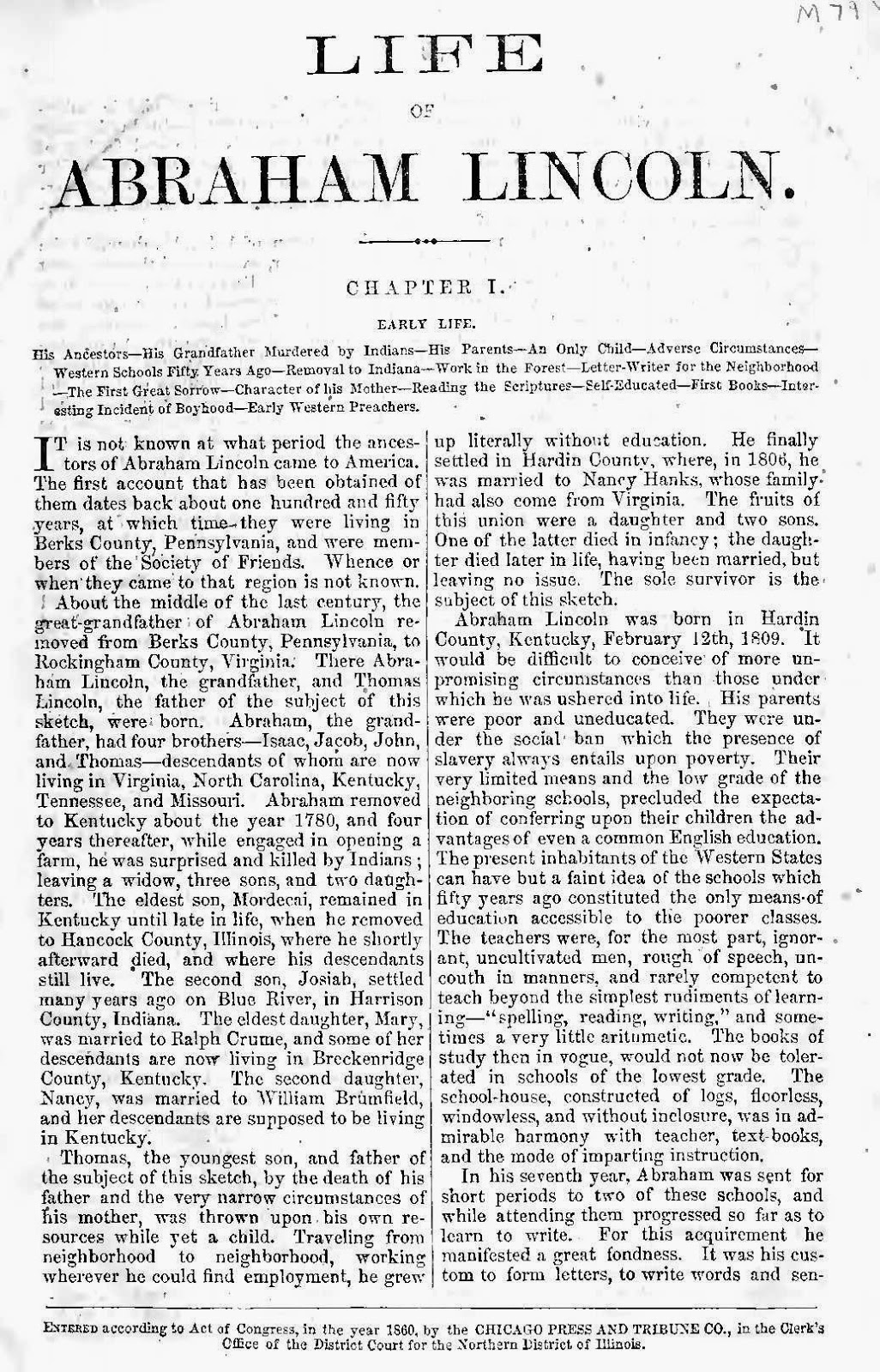 
What is notable about this pamphlet is the contention that Lincoln actually ghost-wrote the piece. If he did, it is interesting that he never mentioned his wrestling match with Jack Armstrong or his defense of Duff Armstrong. Both of these incidents appear insignificant enough to omit from a Lincoln biography, and many biographers do indeed omit the stories. In my book I make a case for the propositions that (1) the wrestling match was a turning point in Lincoln’s life, and (2) the story of Lincoln’s Almanac Trial became a political football during his 1860 campaign for president. I pre-ordered Horrocks’ book, and I am interested to see whether and how the other campaign biographies treated these two incidents.
Posted by George R. (Bob) Dekle, Sr. at 1:20 PM No comments: