I went on the internet in search of wainwrights. The first wainwright I came across was Hansen Wheel and Wagon Shop in Letcher, South Dakota.  I called the shop. Doug Hansen, the owner, was very helpful. Mr. Hansen told me that a wagon hammer was not really a hammer at all. It was a pin used to attach the doubletree (part of the harness) to the wagon. Not only was a wagon hammer not a hammer, but it didn't even look like a hammer. It was actually a dual purpose wrench. In addition to connecting the horses' harness to the wagon, it was also used to tighten the nuts on wagon wheels. Mr. Hansen said that although a wagon hammer was certainly heavy enough to drive nails, it was more properly called a wagon wrench. He described the wagon hammer as the 1800's answer to the modern tire tool. Mr. Hansen even had some for sale, and they looked like this: 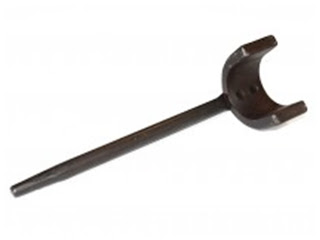 By this time in my search I had developed a burning desire to have an old fashioned wagon hammer, so I went looking for one. I knew Hansen Wheel and Wagon Works didn't have one, so I looked for other wainwrights. I struck pay dirt with Texas Wagon Works in Gonzales, Texas. When I spoke to the owner, Terry Moore, he knew exactly what I was talking about. Did he have one? No. Did he know where I could get one? No, but he could make one for me. (He was a blacksmith). He quoted a price that I thought was reasonable, and that's how I became the proud owner of a genuine replica of an old fashioned wagon hammer.

If you're still reading this post, you must be as curious as I was about what an old fashioned wagon hammer looks like. Here it is: 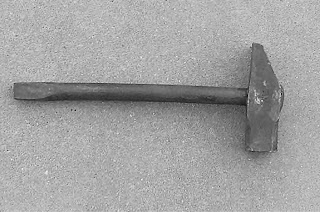 
Why was I so determined to find out about something as arcane as an old fashioned wagon hammer? I thought it was important to the story of the Almanac Trial.  Some scholars with whom I consulted thought that wagon hammers had little or no significance to the case. Were wagon hammers important? Why would I think they were? What, if anything, did they have to do with the case? You'll find the answers in the book.