The killing which led to the prosecution of Duff Armstrong in the Almanac Trial occurred just outside a camp meeting held at a place which is sometimes called Walnut Grove. The grove, which also went by other names, was a 400 acre stand of trees along the Salt Creek in rural Illinois not far from Springfield. The camp meeting was a 19th century American phenomenon somewhat analogous to the early 20th century tent revival. It was a multi-day revival meeting, but it was held under the open sky. People came to the meeting in wagons, circled the wagons around the meeting ground, and camped for the duration of the meeting. The attendees needs were supplied by suttlers who camped on the outskirts of the camps. Some of these suttlers sold alcohol, and some of the worshippers overindulged. This led to such disturbances at the camp meeting that the Illinois legislature passed a law requiring that alcoholic beverages could not be sold within a mile of a camp meeting.


Purveyors of alcohol set up camps a mile distance from the camp meeting, and in addition to attracting thirsty worshippers it attracted riffraff. There would be gambling, horse racing, brawling, and other scandalous behavior at the whiskey camps. The commotion at the whiskey camps would sometimes spill over into the camp meetings. The campers responded to this by either forming security teams of armed men to keep order arranging for a law enforcement presence at the meetings. It was during such a brawl at the whiskey camp outside the Salt Creek meeting grounds that Preston Metzker, the Almanac Trial victim, received his fatal injuries.


There was one revivalist who, in his youth, was not averse to leaving his pulpit to fight with those who would disturb his sermons. This preacher was Peter Cartwright, one of the most famous of the camp meeting evangelists and a bitter political enemy of Abraham Lincoln. The two men argued before Lincoln entered politics, and they opposed each other the first time Lincoln ran for office (Cartwright won the election). Afterward, Cartwright opposed Lincoln every time Lincoln ran for office. During Lincoln’s presidency, however, Cartwright defended him against criticism. 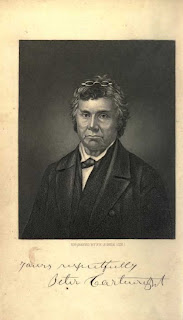 Signed Frontispiece of Peter Cartwright's Autobiography
Cartwright was a towering figure in Illinois religion and politics. When I was in Illinois searching for the scene of the camp meeting, I saw a historical marker which showed the way to Cartwright’s grave. It was down a side road from the one I was traveling, and I resolved that when I returned down that same road to Springfield where I was staying I would visit his grave. I missed the sign on the return trip and consequently didn’t see the actual grave.


Cartwright was the featured speaker at the camp meeting where Metzker got killed, and there is a small amount of evidence that Metzker and Armstrong actually attended one of Cartwright’s sermons. As I said, the evidence for this is small. It is also weak. If Metzker and Armstrong did hear Cartwright speak, it is unfortunate that they did not heed his message. You might say that their refusal to repent was one of the few failures at the camp meeting, which the organizer declared to have been very successful.


As I said earlier, Cartwright went from bitter enemy of Lincoln the politician to defender of Lincoln the president. This may be attributed to the fact that after Lincoln lost his bid for the Senate, he defended Cartwright’s grandson on a charge of murder and got him off. How Lincoln accomplished this feat is a story in itself and will be dealt with at length in a future post.
If you are interested in learning more about Peter Cartwright, you can obtain a free copy of The Autobiography of Peter Cartwright: The Backwoods Preacher at the Internet Archive.
Posted by George R. (Bob) Dekle, Sr. at 9:12 AM