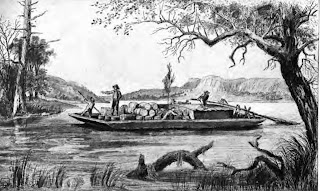 A Mississippi River Flatboat
(From Abraham Lincoln: His Youth and Early Manhood by Noah Brooks


Lincoln began his transformation from backwoodsman to statesman in a small town on the Sangamon River. Lincoln arrived in New Salem when he was in his early twenties, and you might say that he made a smashing entry. He was navigating a flatboat down the Sangamon River to New Orleans when he ran aground on John Rutledge's dam. The dam powered a water wheel which drove a mill. The old mill is long gone, but they have erected a replica on the site of the old mill. 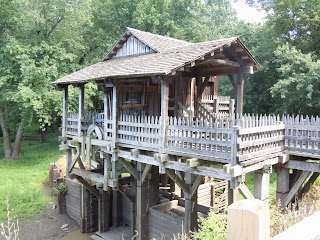 Replica of Rutledge's Mill on the Sangamon River

Lincoln and his fellow boatmen could not get the boat over the dam, or even off the dam. The boat began taking on water, and it looked like they were stymied. Then Lincoln had a brainstorm. He got his mates to help him offload enough cargo to get the boat riding higher in the water, and went to the local cooper's shop to borrow an auger. I had to look up cooper in the dictionary to figure out what a cooper was. A cooper is a barrel maker. If you're wondering what a cooper would be doing with an auger, barrels have bung holes, and coopers need augers to drill the bung holes. The cooper shop of Henry Onstot is the only surviving building of New Salem. 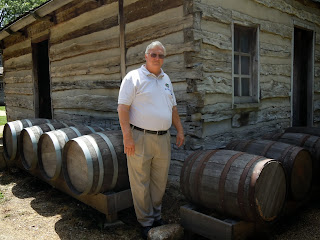 Me in Front of Henry Onstot's Cooper Shop


Lincoln took the auger and bored a hole in the bottom of the boat. The boat was lightened enough for them to get it high in the water and let the water drain out of the boat's interior. Lincoln plugged the hole, and they were able to lift the lightened flatboat over the dam.  Cooper's son T.G. Onstot still had the auger in 1902, when he published a picture of it in a book entitled Lincolnian Picturettes. 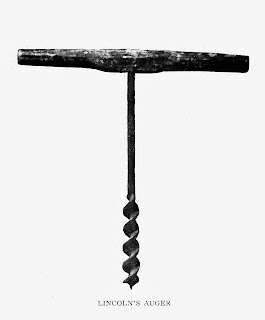 Lincoln's Auger
Lincoln never forgot his troubles as a flatboatman on the Mississippi River system. When he went to Washington as a Congressman, he patented an invention of his which he had designed to lift boats over shallows and sandbars in the river system. A model of it is on display today in the Smithsonian. 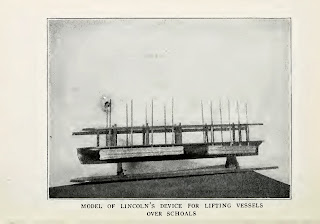 Model of Lincoln's Invention
(Photograph from Life of Lincoln by John S. Abbott)
﻿ 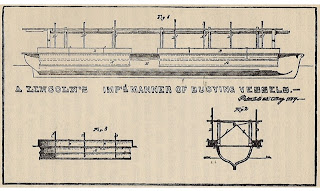