The authors who have told the story of the Almanac Trial give conflicting accounts about the weapon used to kill the victim. Charles Carlton Coffee and Ernest Foster, two early Lincoln biographers, say it was a knife. J.W. Donovan and Francis Wellman report that it was a firearm. Ida Tarbell says it was an ox-yoke. William Barton writes that a neck yoke was used. R.M. Wanamaker says it was a slingshot. D.W. Bartlett says it was a slungshot. Carl Sandburg suggests that there was no murder at all, that the victim cracked his skull when he fell off his horse in a drunken stupor. I attempted to sort out the confusion in my book. When it comes out next year, you can judge for yourself how well I succeeded.


We know what the authors are talking about when they mention guns and knives, but we may be confused when we read about yokes, slungshots, and slingshots. Is there any difference between an ox-yoke and a neck yoke? Here is an ox-yoke: 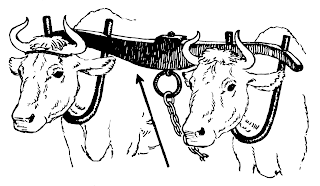 And here is a neck yoke attached to a doubletree: 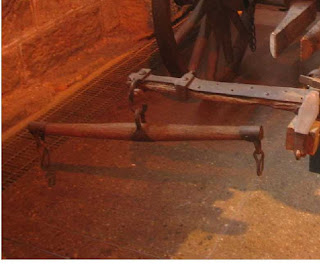 You may decide for yourself which of these two would make the handier weapon.


When the authors speak of a slingshot, we naturally think of something like this:

We would be wrong to do so. In Lincoln’s day the terms slingshot and slungshot meant the same thing, and they didn’t mean the modern toy.


So what is a slungshot? It is 19th century America’s answer to the Oriental weapon that we call nunchucks. Just as nunchuks were originally used as agricultural tools before they became adapted as weapons, the slungshot was originally a maritime tool. Sailors used the slungshot for casting lines. A slungshot was a small, heavy weight attached to the end of a cord. You attach the free end of the cord to the line and sling the shot to whatever location you want the rope to go. I have improvised slungshots to throw rope over treelimbs to hang swings for my children and grandchildren. Sailors would secure the weight to the end of the cord by putting the weight inside a mariner’s knot known as the monkey paw or monkey’s fist. 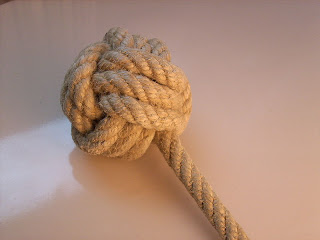 The potential of the slungshot for use as a weapon was speedily recognized. Landlubbers don’t know how to tie monkey’s fists, so the weight was usually put into some sort of a pouch. The cord was shortened and looped to go around the wrist, and the whole thing could fit handily in a pocket. Westerners placed the weight in a leather pouch attached to a looped leather strap something like this: 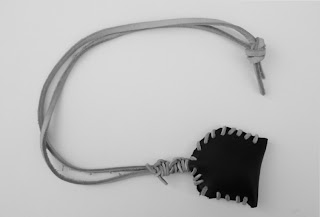 You can improvise a slungshot quite easily. Every man wears socks, and a sock can be quickly transformed into a slungshot. I’ve heard of inmates putting a bar of soap or a combination lock in a sock for use as a weapon. In the movie Death Wish, Charles Bronson improvised a slungshot from a sock and a handful of coins.


Before making a slungshot and dropping it into your pocket, you should remember that the slungshot is no toy. It is primarily a tool, but it is also a deadly weapon, and it is outlawed in many states.
Posted by George R. (Bob) Dekle, Sr. at 4:44 PM