WHEN LINCOLN TOOK A SIP OF WHISKEY

Abraham Lincoln had a reputation as a teetotaler, and so many of his Illinois friends attested to his abstaining from alcohol that we must accept his reputation as founded in fact.  But there was one time at least when he took a drink.


When he was a youth in his twenties, living in Sangamon County, Illinois, Lincoln helped a friend escape a gambling debt by offering the creditor double or nothing on a wager that he could lift a barrel of whiskey and drink from the bung hole. An empty whiskey barrel weighs around 110 pounds. A full barrel contains 40 gallons. Assuming whiskey weighs about the same as water (8 pounds to the gallon), that means Lincoln would be lifting and drinking from a tankard which could weigh no less than 110 pounds and no more than 430 pounds. Some of the friends Lincoln made after he left Sangamon County could hardly believe that he performed such a feat. One of the unbelievers was a man who practiced law with him and later served as a bodyguard for Lincoln when he was president--Ward Hill Lamon. Lamon, a big strong man himself, could hardly believe Lincoln capable of such a feat. He probably thought that Lincoln's admirers claimed he could lift the barrel and drink from it as you or I would drink from a soda can. Such a feat would require superhuman strength

Of course, Lincoln didn’t lift and drink the whiskey in such a manner. According to those who witnessed the feat, he squatted, grabbed the barrel by its chimes, and hoisted it onto his knees, much as a World’s Strongest Man competitor begins to lift an Atlas Stone. The chimes of a whiskey barrel are the rims found at the top and bottom of a whiskey barrel. 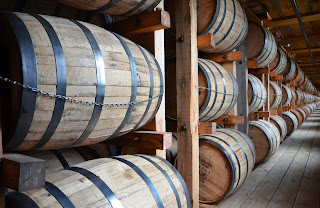 Whiskey Barrels. The chimes are readily visible at the tops of the barrels

With the barrel resting on his knees, Lincoln was able to hoist it into a tilting position so that whiskey could pour out of the bung hole (located in the side) and into his mouth. The part of this story that I find hardest to believe is the claim that after he filled his mouth with whiskey, he spit it out. Teetotaler or not, he deserved a drink after such a display of strength.