When Lane and I got back from Springfield after locating Duff Armstrong's grave we still had some daylight left. What can you do on a Sunday afternoon in Springfield? Probably a lot of things, but what we decided to do was to go visit Lincoln's Tomb in Oakridge Cemetery at 1500 Monument Avenue. When I first laid eyes on it, I thought to myself "An Egyptian Pharoah would not be ashamed to be buried in this tomb." The caretaker's house looked like a medieval castle. 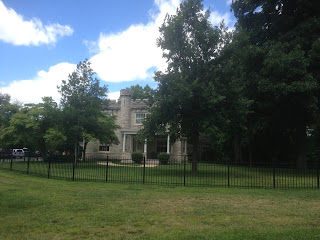 Old Caretaker's House at Lincoln Tomb
A caretaker doesn't live there any more. I think somebody told me the building is now offices, but I could be mistaken. It being Sunday, the building was closed.

The tomb itself is a huge obelisk sitting on a structure which reminded me of the tomb of King Mausolus of Caria, one of the Seven Wonders of the Ancient World. Mausolus's tomb, of course, is the structure from which we get our term "mausoleum." The two structures really don't look much alike other than being huge. Lincoln's Tomb
﻿
The stairway to the balcony was roped off, but you could go inside and to view Lincoln's final resting place. I took no photos inside the tomb. Somehow it didn't seem right to be taking photographs there. Lincoln, his wife, and all but one of his sons are entombed here. Robert Todd Lincoln, a Civil War veteran, is buried at Arlington. You can take a virtual tour of the tomb here: Lincoln's Tomb Virtual Tour

At each corner of the tomb is a statue honoring various military services: infantry, cavalry, artillery, and navy. People had placed pennies on various places outside the tomb. I could not help but feel a sense of awe and reverence at the tomb. 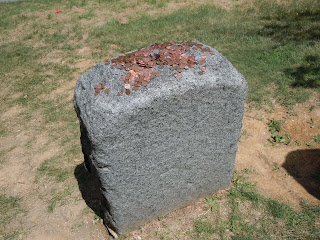 Pennies Left at the Tomb

It took a long time to complete construction of the tomb, so they needed a temporary resting place for the body. The tomb itself sits on a huge mound. At the back of the mound, you can find the temporary tomb, which appears to have been dug into the side of the mound.

Although it's not part of the tomb, the old Springfield train station has some connection to Lincoln's burial. That station was the last stop for the train which carried Lincoln's body from Washington back to Springfield. On the way, the train stopped in several cities for funeral services. If I remember correctly, Lincoln had 19 funerals, with the first being in Washington and the last in Springfield. 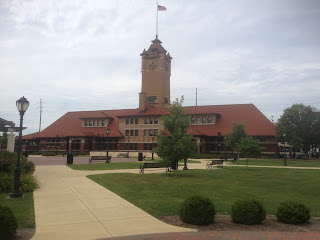 The tracks have been taken up and the station is no longer functioning as a station, but it is an interesting place to visit. Inside they have a replica of the funeral train on display.