LINCOLN AND MOTIONS FOR CHANGE OF VENUE

Edgar Lee Masters gained immortality by writing a series of poems entitled Spoon River Anthology, but he gained infamy in his lifetime by writing a biography, Lincoln the Man, in which he criticized almost everything Lincoln said or did. His account of Lincoln’s performance in the Almanac Trial is no exception. Masters claimed Lincoln was a second rate hack of a lawyer who didn’t have enough legal skill to properly move for and obtain a change of venue. Since the defense moved for and obtained a change of venue in the Almanac Trial, somebody other than Lincoln must have filed the paperwork and argued the motion.


As a matter of fact, Lincoln got more changes of venue in his 23 year legal career than I had in my 32 year career. It seems that a change of venue was easier to come by in antebellum Illinois than it is today. Apparently all you had to do was have your client file an affidavit alleging that that sentiment of the people in the county was so against you that you feared you couldn’t get a fair trial. There are a few more hoops to jump through today.  Here is an affidavit for change of venue in Lincoln’s own handwriting: 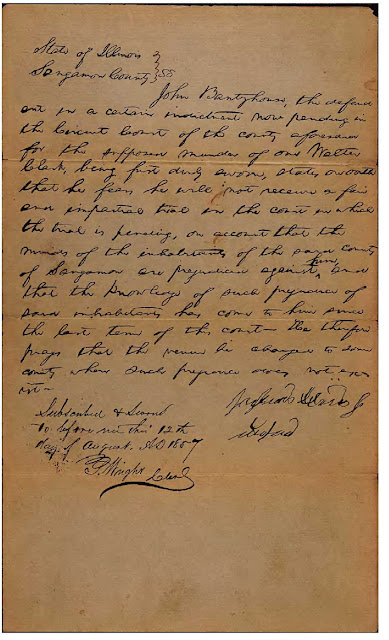 In Lincoln's day lawyers often wrote their pleadings on whatever paper was available while they were sitting in court waiting on their cases to be called. This affidavit for change of venue was quite likely written in just such a fashion. It was filed in a murder case, People of Illinois v. John Bantzhouse, and judging from the near illegible signature Bantzhouse was either scared to death or illiterate. If he was frightened, he had no need to be. Lincoln no only won the motion for change of venue, he eventually got the case dismissed.
Posted by George R. (Bob) Dekle, Sr. at 11:37 AM