INSIDE THE ALMANAC TRIAL COURTROOM

Nobody really knows how the courtroom was set up when Lincoln tried his famous case there. It is believed that the judge's bench is the same as it was in 1858, and maybe the rail which divides the audience from the working area. They have tried to recreate the layout, and it looks like a fairly reasonable setup for a courtroom. When you walk in the door, here is the first thing you see: 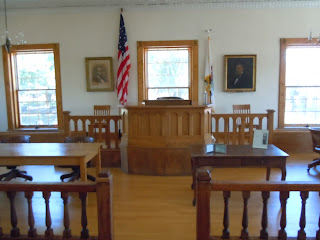 ﻿
Why they would have a witness stand on both sides of the judge's bench is somewhat of a mystery. It seems that the witness stand on the right would better be set up as a clerk's workstation. On the left side of the courtroom sits a row of six chairs, which I assume represents the jury box: 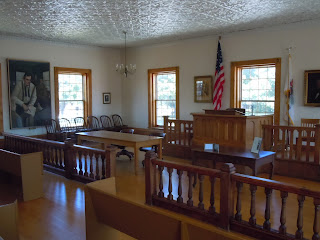 The jury box panel is missing, and there are only half enough chairs. In Lincoln's day all juries consisted of 12 jurors. On the wall behind the jury box you see a painting of Lincoln showing the famous almanac to the jury.

Looking to the right you see a table surrounded by chairs. This is probably where the clerk sits when the courtroom is used to hear cases. On the wall on the right side, you see a reproduction of the ambrotype photograph which was taken of Lincoln on the afternoon of the trial. The original ambrotype is now located at the University of Nebraska. This ambrotype is unique in that it is the only known photograph of Lincoln wearing a white suit. 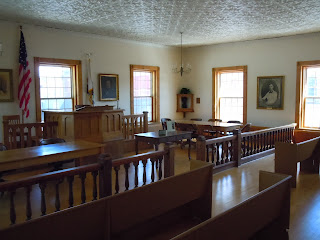 If my memory serves me correctly, I believe that our guide, Corky Kinstle, told me that the seats in the audience were discarded pews from a local church. On the back wall of the courtroom hang a number of exhibits, including a reproduction of the derringer used by John Wilkes Booth to assassinate Lincoln. A more pertinent exhibit is a framed 1857 almanac turned to the page showing the moon wasn't where the eyewitness said it was. You will also see a reproduction of Norman Rockwell's painting of Lincoln holding the almanac as he cross-examines the eyewitness. 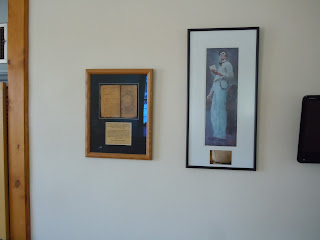 In the files of the Library of Congress, I found a 1937 photograph which gives us a possibly more accurate layout of the courtroom: 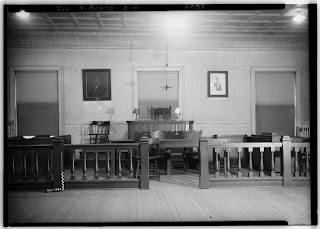 The bench and rail look the same as in the current layout, but the jury box looks much more like a jury box, with more seats and a panel in front of the seats. On the right is the clerk's workstation, which looks much more functional than the table which now sits in the﻿ right corner of the courtroom. There is only one counsel table, probably because the jury box and clerk's work station take up too much room to allow for two tables. In my early days as a lawyer, I tried many cases in a courtroom which easily accommodated only one large counsel table. It was somewhat awkwark to be sitting at the same table as your opponent, but we adjusted and made do. Finally someone realized that we could sit at separate tables if the one large counsel table was removed and replaced by two smaller tables. This was probably how the courtroom was set up when Lincoln defended the Almanac Trial--two smaller counsel tables rather than the one large table in the photo. Eyewitnesses to the trial described the lawyers as sitting at separate tables.
There are a number of websites devoted to the courtroom:
Lincoln Courthouse & Photos Page
LincolnInBeardstown.org
"Lincoln Courtroom Museum" at Illinois State Bar Assn.
Posted by George R. (Bob) Dekle, Sr. at 7:07 AM