THE BEARDSTOWN COURTHOUSE THROUGH THE YEARS

Before we go into the courtroom, let's take one more look at the outside of the courthouse. In addition to the photographs that I took of the courthouse, I found two others which showed the courthouse in earlier years. One photo comes from an article written by J.N. Gridley in 1910. The other comes from the Library of Congress, and was taken in 1937.Here are the three pictures: 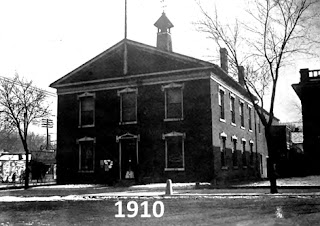 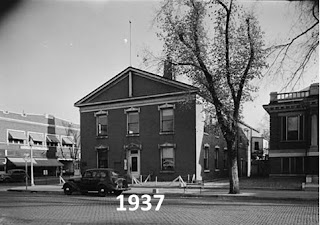 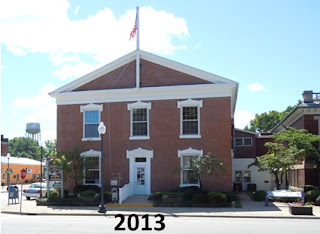 The structure which looks like a cupola in the two earlier photos is not a part of the courthouse. It is on the façade of a building behind it. From 1910 to at least 1937 the building served as the Beardstown city hall. The most visible changes are: (1) The elimination of the chimneys sometime between 1910 and 1937. (2) The paving of the road in front of the courthouse, from dirt to brick to asphalt. (3) The buildings surrounding the courthouse. (4) The flagpole, which appears to be a wooden shaft with a square cross section in the 1910 & 2013 photos, but is a typical flagpole in the 1937 photo. Apparently the flagpole was changed to make it more like the one over the courthouse when Lincoln litigated the Almanac Trial.