NEW BOOK ABOUT THE ALMANAC TRIAL

Before he became president, Abraham Lincoln made his living as a lawyer trying cases in the courts of Illinois. Of all the cases he tried, none is more famous than the case that history remembers as the Almanac Trial. The trial was contested in this courthouse in Beardstown, Cass County. 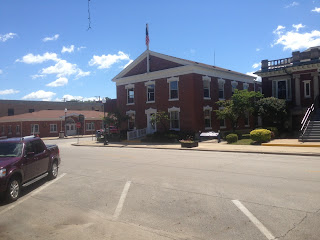 Although Beardstown is no longer the county seat of Cass County, the courtroom is still in use. Most days the courtroom serves as an exhibit in the museum which is housed in the old courthouse, but once every week or so it is used to hear cases. It is the only active courtroom in Illinois where Lincoln actually tried cases. Across the street in the park there are two stones commemorating the places where Lincoln and Douglas gave speeches during their campaign for the Senate. The speeches were not technically a part of the Lincoln-Douglas Debates because the candidates gave their speeches on different days, and they stood on different sides of the park to give them.
Douglas’s stone stands out. 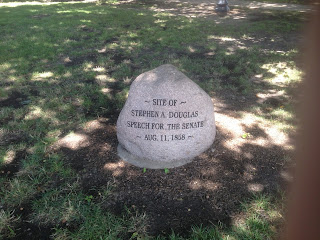 Stone Commemorating Stephen A. Douglas's speech at Beardstown
But Lincoln’s is overgrown with vegetation. In the upper right hand corner of the photograph you can see my finger as I held a branch back to expose the stone. 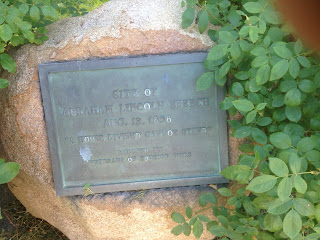 
The story of the Almanac Trial became an issue during Lincoln’s run for the Presidency, and in the process the story became so twisted and garbled that it is hard to separate fact from fiction. I am in the process of writing a book which seeks to untangle the many different versions of the story and ferret out the probable course of the trial. When untangling the story, I tried to rely as much as possible on the letters, statements, and reminiscences of those who were involved in the case, and also upon the actual court records. I think that I have recovered a story which is different from the popular memory, but I think it is every bit as compelling. The trial was basically a high-stakes chess match between Lincoln and the prosecutor, Hugh Fullerton, and the maneuvering Lincoln did to win the case was little short of brilliant.
I just finished what I hope will be the final draft of the manuscript, and Praeger Books, an imprint of ABC-CLIO, should have it in print sometime next year. I learned a lot of interesting details about the trial and its background, so many that I could not get everything to fit within the publisher’s word limit. I began this blog so that I could share these details with the public. When the book comes out in print, I will begin posting periodic stories about the aspects of the trial which I couldn’t fit into the book. Stay tuned for future posts.
Posted by George R. (Bob) Dekle, Sr. at 12:22 PM