When Lane (my wife) and I arrived at the courthouse in Beardstown, it was a Saturday and the courthouse was closed. I was disappointed that I wasn't going to be able to see the courtroom, because we had a busy schedule during our time in Illinois and weren't going to be able to come back. I decided that I could at least take a photo of the plaque that the Beardstown Woman's Club had put on the front of the building. 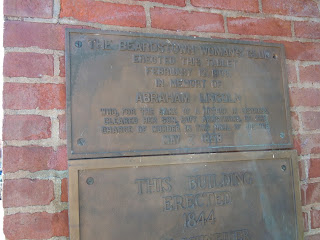 The plaque reads "The Beardstown Woman's Club erected this Tablet February 12, 1909, In Memory of ABRAHAM LINCOLN Who for the sake of a mother in distress, cleared her son, Duff Armstrong, of the charge of murder, in this Hall of Justice, May 7, 1858."

We were getting ready to leave when Lane suggested that she take  photo of me standing at the front door of the courthouse. 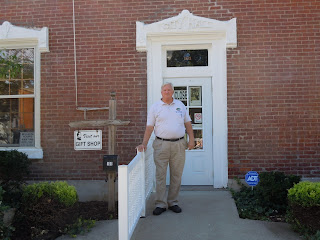 Me in Front of the Cass County Courthouse


I am a compulsive reader, so while I was at the front door, I read the signs taped inside the window. I learned that the courthouse museum was open on Saturdays, but that we were just too early. We waited for the museum to open. Around 9:00 a gentleman by the name of Corky Kinstle soon arrived to unlock the door and we followed him in. He gave us the full tour of all the exhibits in the museum, most of which dealt with the history of Beardstown. It was interesting, but I couldn't help becoming impatient to go ahead and get upstairs to the courtroom.

Then he took us down and showed us the jail, which was a dungeon-like room at the rear of the courthouse. It was here that Duff Armstrong was housed from November 1857 until May 1858 awaiting trial. Mr. Kinstle told us that Armstrong didn't spend all his time in the cage. The sheriff granted him trustee status and let him out to go work doing odd jobs at the sheriff's home. It is likely that this helped Duff get acquitted. The people of Beardstown, twelve of whom would eventually serve on Duff's jury, likely became familiar with him and decided that he couldn't be that desperate a criminal if the sheriff was letting him out to do odd jobs.

Mr. Kinstle said that an effigy of Duff was on the bed in his cell. The dummy of Duff had been there for many years, and scores, if not hundreds, of visitors to the museum had gotten their pictures taken with "Duff." I declined to get my picture taken with him, but I did take a photograph of him lying on his jail bunk bed. 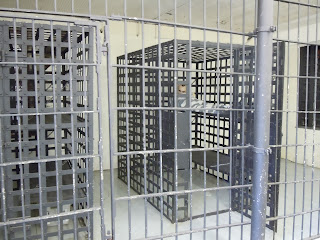 As you can see from the photograph, accommodations for prisoners have improved in the last century and a half. It is said that while Duff was in jail there was also a school teacher serving time there, and that he taught Duff to read. After looking at the jail, our guide decided it was time for us to go upstairs and see what they had up there.

One room of the upstairs was called the "Black Museum," which made me think of Scotland Yard's Black Museum in London. The Beardstown Black Museum was nothing like the one in London. London's Black Museum, which is not open to the public, contains evidentiary exhibits from various criminal investigations over the years. Back in the heyday of old time radio, Orson Welles narrated a radio show called "The Black Museum." At the beginning of each episode, Welles would describe one of the evidentiary exhibits from the museum, and then you would  hear a dramatization of the case in which the exhibit was collected. The Beardstown Black Museum was a collection of antiques and curios donated by a man named Black. Outside the courtroom and the jail cell, this was my favorite part of the courthouse museum. Mr. Black collected antique firearms, and the display of guns was quite interesting.

After looking at the Black Museum, it was time to go into the courtroom itself. I will save a description of the courtroom for a future post.
Posted by George R. (Bob) Dekle, Sr. at 11:13 AM